The Only Way Forward

Can the new world order be saved by humanism? 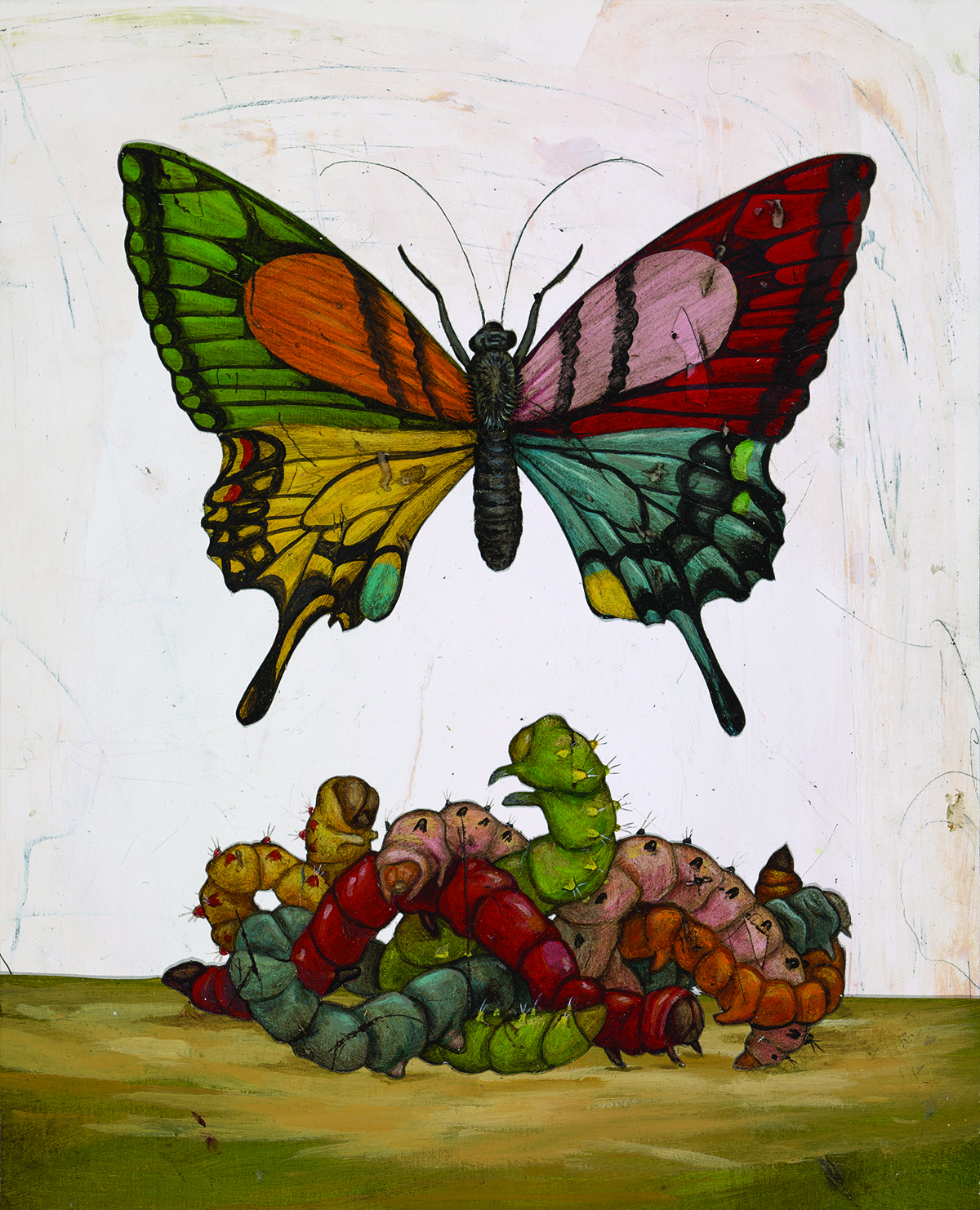 This year was in many ways one of great-power politics. The resurgence of Russia on the global stage, from Ukraine to Syria to China. The Saudi-Iranian power struggle in the Middle East. China’s assertion of its status as the Middle Kingdom once again, expecting deference from its neighbors in East and Southeast Asia. North Korea’s determined pursuit of nuclear weapons. Even Great Britain’s rejection of the European Union, fueled in part by Tory dreams of Britannia sovereign once again. It is a world of deals and shifting alliances, particularly as Pax Americana seems to wane—a trend that Donald Trump’s stunning election as president threatens to accelerate—and U.S. foreign policy takes a decidedly realist turn.

It is a world of 21 million refugees and 41 million internally displaced people, driven from their homes by war, famine, and tyranny; a world in which a half-million Syrians have been slaughtered in front of our eyes; a world with a conscience that can no longer be shocked by human suffering, whether from poison gas, barrel bombs, deliberate and systematic rape, or looming genocide. How, then, can one argue that this was a year of humanism?

Part of the answer lies in numbers. Our world comprises 195 states. A state is defined under international law as an entity with a permanent population, a defined territory, a government, and the capacity to enter into relations with other states. Human beings have not figured out a better way to organize themselves globally, other than emerging regional actors such as the EU, which is having an identity crisis. Despite exaggerated claims about the rise of cities and the new medievalism, states are here to stay. Within them, however, are 7.4 billion people who are making their presence and power increasingly felt on the global stage.

Individual activists have a long history, of course. A review of Nobel Peace Prize winners shows an alternation between politicians and notable individuals determined to shape their world in a big way: Jimmy Carter, Shirin Ebadi, Nelson Mandela, Muhammad Yunus, Shimon Peres. Today, however, ordinary people—whose names may never be widely famous, who may never win Nobels—are empowered as never before. On mobile devices in some 2 billion pockets, men and women can create companies, start social movements, make art, guide refugees, and find like-minded citizens. Technological capabilities obviously enable criminals as well as creators, but individual capacity to turn dreams into reality is greater than at any point in human history.

The rise of human agency also comes from the creation of new professions. Social entrepreneurship and social-impact investing open wide, new vistas for individuals committed to solving global problems. As Roger Martin and Sally Osberg argue in their book, Getting Beyond Better, social entrepreneurs are distinct from direct social-service providers and social advocates. They “seek to shift a stable but suboptimal equilibrium in a way that is neither entirely mandated nor entirely market-driven. They create new approaches to old and pernicious problems. And they work directly to tip society to a new and better state.”

Taken in the aggregate, such organizations have as much global impact as many countries have with their foreign aid budgets. Whereas countries must depend on their tax coffers, the reservoirs of social entrepreneurship are the infinitely renewable energy and innovation of individuals. It is what New York Times columnist Nicholas Kristof has called “DIY foreign aid.”

Social-impact investing has exploded from a few pioneers into a diverse ecosystem of boutique funds, philanthropic organizations, family offices, and large commercial banks. In Capital and the Common Good, author Georgia Levenson Keohane notes that nearly every mainstream financial institution, from Barclays to Bain Capital, now has a social or sustainable finance unit. The landscape is highly specialized by geography and issue area, ranging from small-business development to environmental and economic sustainability.

Consider the United Nations climate change negotiations in Paris. As Oxford professor and activist Thomas Hale has explained, the Paris Agreement of last December represents a paradigm shift in international agreements, from a “regulatory” model of enforceable legal obligations to a “catalytic and facilitative” model that both spurs and helps a wide range of actors meet a rolling schedule of steadily increasing commitments. That model, in turn, can work only if state parties to an agreement formally include nonstate and substate actors—or, as they insisted on being called in Paris, “non-Party stakeholders.” These are not simply NGO lobbyists. According to a study released during the Paris negotiations, more than 7,000 cities from more than 99 countries and some 5,000 companies from 88 countries made climate commitments. The cities represent 11 percent of the world’s population and about 32 percent of the global gross domestic product, and the companies represent over $38 trillion in revenue.

These actors are not new, nor is their presence at multilateral negotiations. Jody Williams and the International Campaign to Ban Landmines won the Nobel Peace Prize in 1997 for catalyzing the negotiation of the Mine Ban Treaty. Paris was different, though, because it included such actors not as alternatives or as useful additions to the intergovernmental regime, but as central elements of that regime: An action agenda for non-Party stakeholders was the “fourth pillar” of the negotiations, on par with national pledges, the financing package, and an agreement.

This approach is being used to address the refugee crisis as well. Alongside a U.N. General Assembly Summit on refugees in September, U.S. President Barack Obama hosted a smaller Leaders Summit of 50 nations to collect pledges to help refugees and a Call to Action meeting of private-sector CEOs. In his remarks, he announced that more than 50 companies had committed more than $650 million in cash and in-kind assistance. George Soros also personally committed to invest $500 million in programs and companies benefiting refugees.

A reason to celebrate, or at least elevate, humanism is that human interests and strategic interests are slowly but inexorably merging. Think about what “human interest” generally means: the lighthearted or sometimes tragic story about the adventures or travails of another person, one that will draw eyes on a page or serve as instant click bait. Alternatively, think about “humanitarian interests,” the moral side of foreign policy that proper Machiavellians must learn to ignore. The death of innocent individuals, the destruction of cities, the desecration of heritage—becoming a statesperson means not letting your heart bleed, or at least learning to hide it beneath layers of properly cool calculation. To be fair, the prince whom Machiavelli counsels is bound to eschew global morality in favor of advancing the interests of his people, a moral and political obligation of its own. As realists never tire of pointing out, sometimes rightly, “legalism-moralism,” as George Kennan called it, can lead to more bloodshed than the problem it sought to solve. Every action has consequences, many of them unintended.

In a world of increased human agency, however, for bad as well as good, conflicts cannot be snuffed out by government decree. If the combatants do not answer to a government, they will not stop fighting when a government says so. U.S. Secretary of State John Kerry and Russian Foreign Minister Sergei Lavrov can agree to a cease-fire in Syria, but neither they nor any other government controls the actual fighters. Even when governments obliterate a battlefield, destroying enemy strongholds and recapturing cities, the tension simmers like an underground fire, ready to flare with enough oxygen.

In this world, what happens to people matters. Torture a family’s children; kill parents, spouses, and siblings with a barrel bomb or a gas attack; pulverize a neighborhood—the people will not forget. Think how many “frozen conflicts” erupted after the Cold War, enmities that governments had repressed with censorship, soldiers, and secret police. Revenge can be delayed but not denied, unless injustice is ultimately answered with at least some measure of justice.

Humanitarianism is not enough. It is a palliative after the fact, but it also misses the deeper point. Violence and displacement will spread like disease, from person to person, family to family, and country to country. Plenty of atrocities in plenty of countries will remain unaddressed, but as the doctrine of the Responsibility to Protect attempted to delineate, governments must act when another government commits genocide, crimes against humanity, ethnic cleansing, or systematic and serious war crimes. States must embrace the values of humanism in the service of self-interest. That may be a heavy lift for President-elect Trump, who has given no sign of concern for the plight of any humans other than Americans. Yet governments of every stripe will ultimately come to understand that prevention is in their self-interest, even if takes a cataclysm or two to drive home the point.

Perhaps, however, we embrace humanism just as we are losing our humanness. Technologists and futurists predict that genetically engineered superhumans and cyborgs are the future, possibly as soon as later this century. Historian Yuval Noah Harari, author of Sapiens: A Brief History of Humankind, anticipates the disappearance of Homo sapiens as a species. Moving toward a world in which the digital and the physical realms merge—and biology no longer just means the study of natural but of engineered beings as well—it seems reasonable to cling ever more tightly to the consciousness and connections that make us human.

Harari describes the “cognitive revolution” occurring roughly 70,000 years ago, which gave Homo sapiens not simply the ability to communicate but to communicate in “fictive language,” the capacity to imagine things that do not exist—from love to art to law—and then to bring them to life. In a digital, automated, data-designed future, celebrating and advancing humanist values and, indeed, increasing our respect for all living beings may be the only way forward.